The dam was constructed between 1908-1912. The plan was made by a Viennese engineer Emil Grohmann, the construction was done by the firm Rabas, Kosina and Weiner. A partner of this firm was the top engineer Julius Radna who organized all works on the place. The dam cost c. 70 milion Czech crowns. The parameters of the dam are as followed: the dam takes in 4,4 milion cubic meters of water while an area of 37,8 hectares is filled. The drainage area is 63,8 square kilometers, the length of the lake created  is over two km.

The dam was built as one of many smaller reservoirs for securing water supply for the canal Dunaj – Odra – Labe. At the same time the dam was to protect the valley below against dangerous floods. The construction of the dam and the occurrence of a lake in a beautiful environment of Vsetínské vrchy soon attracted first holidaymakers. Today the resort is primarily used for recreation.

The original aim to supply water to the D-O-L canal from small reservoirs in the upper parts of the flow sounds obsolete today. Other bigger reservoirs would do this.

The dam is gravitational, bricked by quarry-stone that is put on grout. A special coat  (0,5 cm on the cement facing and 2cm on the upstream face side of the brickwork) was used for padding. The padding is protected against mechanical damage by a retention wall of 0,5-0,7m. At the bottom of the dam (to the level of 369m above sea level) the padding is thickened by a covering from compressed clay (1,5-2,5m). Behind the upstream padding there is a square vertical drainage in the wall. The aerial face side of the dam is overlaid by a stone wall from greywacke. On the ground plan of the dam the dam crest makes an arch of a radius of 135m. 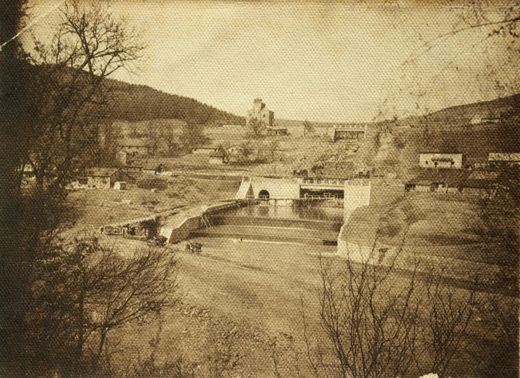 The bedrock is made of layers of sandstones, pudding stones and clay slate. The slant of the geologic layers is 38 degrees to the north-west. The sandstones have limy sealer. The clay slates are soft.

At the end of the stole a small water power station was built in 1982 in order to use the energy of the draining water. On the both draining pipes were installed two side pipes with Banki turbines.

It is also possible to empty the dam through a draining tower and a stole on the left bank of the dam next to the safety overflow. There are two pipelines (Js 700mm) in the draining tower with two pairs of  wedge-shaped sliders. Water is led to the draining pipelines through a stole  that is 2,9 m wide, 3,27 m high and 19 m long.  The steel pipeline buried in concrete is 29 m long and it ends in a stole 1,9 m wide, 3,27 high and 114 m long.

A side safety overflow was built on the left bank of the dam used for transferring flood water. The solid concrete point with a stone lining has a spot height of 385,16 m above sea level. The length of the spillway edge is 43 m. The safety overflow is designed for a flood overflow of 140 m3s-1. The biggest overflow was there in July 1997 (about 120 m3s-1).

The construction of the dam on the stream Bystřička was begun in 1907 after a thorough preparation and discussions. The office building was built in advance and it is still used for the running of the dam. 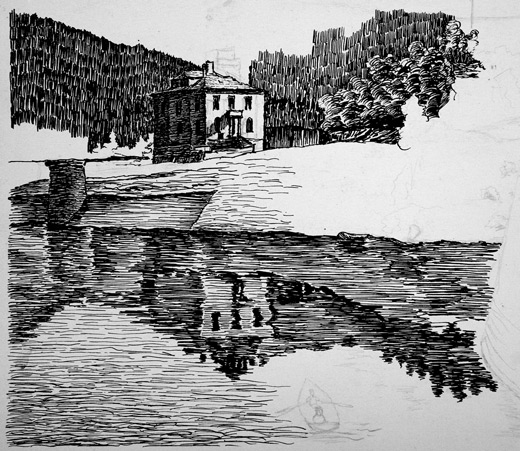 All stonecutter works were done by hand. Stone for the construction was mined in the stone-pit not far from the dam. It was transferred through a light railway. Stone of better quality was brought from a stone-pit in Hrabůvka u Hranic in Bystřice pod Hostýnem.

In the course of the construction of the dam there were many damaging floods but nothing happened to the unfinished dam. In 2001 the reparation of the dam crest was begun.

Change in appearance, Structure of pages